Here we are friends, the front cover reveal of my debut, FLESH AND FIRE. The release date is April 22nd, and it comes to you as part of Journalstone’s Double Down series with DARK OF NIGHT, a new novella from Jonathan Maberry and Rachael Lavin.

Back cover copy for FLESH AND FIRE: In the midst of a midlife crisis, Todd is haunted by Chloe, the lover who died not long after their relationship ended. When Chloe escapes Hell in search of the peaceful rest that has eluded her, a demon named Samael is on her trail and she needs Todd’s help. While on the run Todd and Chloe face demons real and personal, soul-threatening danger, and their long-buried feelings for each other.

Jonathan and Rachel’s piece brings together Joe Ledger, Dez Fox (DEAD OF NIGHT), and Rachael Elle (BITS AND PIECES) into one adventure. 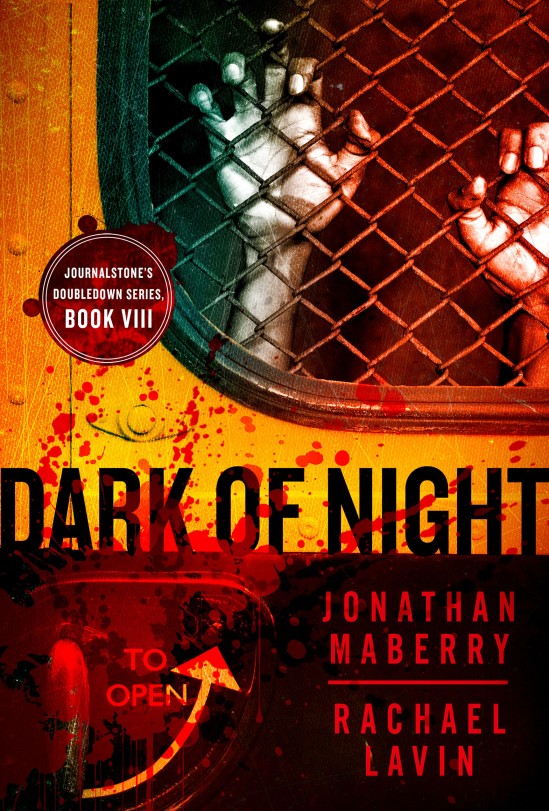 With the pub date getting closer, I’m getting more and more excited. The icing on the cake through all of this is this awesome blurb from one of my favorite working writers, Lee Thompson.

“FLESH AND FIRE is riveting and irresistible. Filled with horrors and delights, it asks the ultimate question: Can love conquer all?” – Lee Thompson (Author of WHEN WE JOIN JESUS IN HELL and AFTER THE FOG CLEARS)

The book should be up for preorder sometime this week so stay tuned.

For a genre populated by the dead, zombie lit is alive and well. It’s been this way since 2003 with the release of Brian Keene’s seminal horror novel, THE RISING. With the success of the first season of THE WALKING DEAD last year, its obvious that the genre isn’t showing any signs of slowing down. No one knows the genre like Jonathan Maberry who seems to have quite a relationship with our undead counterparts. Whether as a global threat in the first of his mainstream Joe Ledger thrillers or as the antagonists of the YA ROT & RUIN series, he has shown how versatile they can be. Despite his various, and always exciting, explorations into the world of the undead, he has yet to deliver a traditional, Romero-esque zombie tale. Until now.

DEAD OF NIGHT is Maberry’s love letter to the zombie genre. Reading like the literary equivalent of Zack Snyder’s DAWN OF THE DEAD and the original NIGHT OF THE LIVING DEAD, it follows the citizens of a small Pennsylvania town as they struggle to survive against an army of the dead. What at first glance may appear to be standard fare soon evolves into its own, introducing elements that aren’t so familiar.

One of the things that really sets it apart from others of its kind is Maberry’s approach to the undead. In his vision, the consciousness of the deceased lives on inside the reanimated body, but can only watch in idle horror as his or her body committs heinous acts of murder and cannibalism. To let my guard down a bit, that prospect is terrifying to me. It calls to mind degenerative diseases, or images of hell. Maberry captures it well, but it’s not pretty. Each scene where this is portrayed is a hard read, even for a seasoned horror fan like me.

Another point that makes it stand out is that it features a more lucid “lead zombie” in the character of serial killer Homer Gibbon. While this has been done before, Maberry offers a satisfying explanation as to why he is different from the other zombies. Gibbon is a wicked character that is bound to stay in readers’ imaginations for a very long time.

Maberry has a lot to offer as a writer, but where he shines the most is his creation of realistic, mulit-faceted, and likeable characters. Dez, the protagonist, is a mean, redneck bitch, but she possesses a strong sense of duty and has a troubling backstory that makes the reader understand her emotional makeup. Providing a contrast to her ultra-conservative views and often mean disposition are her former lover, journalist Billy Trout, and Dez’s partner JT. When each of their storylines collide in the third act, the novel picks up an extra layer of complexity. The last few scenes where they’re trapped in a school surrounded by zombies and the military, trying to survive and protect the children, are sure to get the adrenaline pumping. They also give the impression that the piece carries with it a message about unity and working together, instead of against each other, in the face of a crisis. In Maberry’s worldview, he separates himself from some of the more cynical practitioners of the zombie tale, and implies that we can actually do it.

DEAD OF NIGHT is a damn fun read. It’s got zombies, guns, and a shit-ton of heart. To use an old cliche, I couldn’t put it down, especially the last 75 pages or so when I absolutely HAD to know how it would end. Jonathan Maberry scores again.

DEAD OF NIGHT is in stores October 25th.

Ever watch the Friday the 13th series and think that maybe Jason isn’t so much evil as he is misunderstood? Do you think Mr. Hyde is way cooler than that nerdy wimp Dr. Jekyll? Would you consider Damien Thorn (The Omen) or Reagan MacNeil (The Exorcist) to be exemplary children? Well, The Monster’s Corner, the new anthology by Christopher Golden may be what you are looking for. Featuring all new, never-before-published stories from some of the best in the business, it paints thoughtful, disturbing and often humorous pictures of our neighbors in the dark. Everyone from Medusa to the Frankenstein Monster to the Colossal Man gets a chance to have their story told.
Though centered on a shared theme, these stories are of varying lengths, voices and tone. David Liss opens the anthology with the wonderful story, “The Awkward Age.” It focuses on a literally ghoulish teenage girl who sets her sights on the father of one of her friends. Jonathan Maberry’s “St. John” is an uncharacteristically dark tale packed with apocalyptic Catholic imagery. Trading in the hip sensibilities of the Joe Ledger series for brooding, Gothic prose, he delivers one of the standout pieces in the collection. These two tales set the tone for the rest of the anthology, where some of the authors step out of what they normally do in order to tell fresh, unique horror stories.
The darkest of the batch is undoubtedly Nate Kenyon’s “Breeding the Demons.” While all the tales contained are enjoyable, this is the only one I would label “scary.” The story follows a photographer who shoots depraved scenes of rearranged body parts for a group of demonic buyers. Sleeping came with great difficulty the night I read this one. It gave me honest-to-God “heebie-jeebies.”
Other standouts include Heather Graham’s “Wicked Be,” Jeff Strand’s wild plant story “Specimen 313,” David Moody’s homage to atomic age SciFi films “Big Man,” Sarah Pinborough’s Medusa story “The Screaming Room,” Tananarive Due’s “The Lake” and Michael Marshall Smith’s “The Other One” (which brilliantly tells the tale of the destructive side that lives in all of us and makes us care about it).
Overall, Christopher Golden has put together yet another kickass anthology to rank up there with The New Dead. While there were some standouts, I am hard-pressed to find any weak links in the collection. There is something for every horror fan to be found here, and each story delivers the goods. Or, in this case, “the evil.” Some of the most fun I have had reading all year.

The King of Plagues, the third book, in Jonathan Maberry’s increasingly popular Joe Ledger series picks up where the previous entry left off, and it picks up fast. I had read the prologue online a couple of weeks before the novel was released, so I dove right into chapter one. It is a brief paragraph that sets up the story that is to follow even better than the prologue does. In fact, its brevity is utilized in making it one of the tightest first chapters I have ever read.
Crazy thing, folks; it doesn’t slow down after that. At a hefty 430 pages Plagues manages to move at a breakneck pace, giving us enough information along the way so that we know who our characters are without ever treading into an overabundance of description. Maberry follows the well-known thriller writing method of “action on every page,” even having the first meeting between Joe Ledger and one of the female protagonists be filled with tension.

The story is about a secret society who is using weaponized versions of the 10 Plagues of Egypt to royally screw up world economies. Two of the members are recognizable from previous entries in the series and their story reaches new and thrilling heights here. It is cool to see them return to cause Joe Ledger and the DMS more headaches. Also, the plot is filled with enough conspiracy theories to make Fox Mulder jump up and down like a giddy little school girl. 9/11, Osama bin Laden, and the 2008 recession all materialize in their own way in Maberry’s mythos, bringing the story a penetrating realism. The best thrillers, I feel, are the ones that can hit home, the way Plagues does, while still delivering the larger than life action.

Another positive aspect, Joe Ledger is not just a wisecracking action hero. His multifaceted personality is portrayed interestingly here, as in the other books in the series, as his chapters are told in first person while the others are told in close third. The more I learned about Ledger, the more I felt the world would be a better place if the folks in Washington held his politics. He’s an idealist despite the horrors that he witnesses and he is not afraid to act when the calling is right. He is neither flag-waver nor anarchistic radical, simply a sort of everyman caught in a crazy world. That’s something I think we can all relate to.

The thrills are also in abundance. Buildings are blown up, innocent peole are threatened, and there is plenty of combat, both hand-to-hand and with gunplay. And the book is scary. While marketed as a mainstream thriller, it still manages to get under the reader’s skin and make him/her incredibly uneasy. What’s particularly disturbing is how possible these scenarios seem, especially in this day and age.

Assassin’s Code is the fourth book in the series and is up next. I urge you who are not familiar with Joe Ledger, the DMS, and their adventures to pick up any of the three that are out (as they don’t really have to be read in order). These action thrillers should not be missed.

Error: Twitter did not respond. Please wait a few minutes and refresh this page.